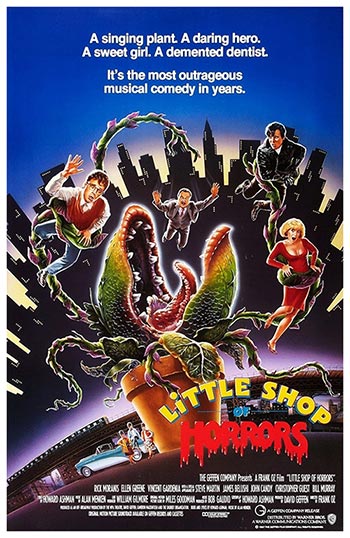 Seymour Krelborn is a nerdy orphan working at Mushnik’s, a flower shop in urban Skid Row. He harbors a crush on fellow co-worker Audrey Fulquard, and is berated by Mr. Mushnik daily. One day as Seymour is seeking a new mysterious plant, he finds a very mysterious unidentified plant which he calls Audrey II. The plant seems to have a craving for blood and soon begins to sing for his supper. Soon enough, Seymour feeds Audrey’s sadistic dentist boyfriend to the plant and later, Mushnik for witnessing the death of Audrey’s ex. Will Audrey II take over the world or will Seymour and Audrey defeat it?

Entertaining musical comedy based on the off-Broadway smash inspired by Roger Corman’s cult low-budget horror flick “The Little Shop of Horrors” never lets up on energy in this decidedly camp tale about nerd Seymour Krelborn (Moranis in geek mode) the apprentice florist at a skid row floral shop whose hybrid creation of a Venus flytrap grows in more ways than one when it develops a nasty craving for human blood. Very funny and brightly directed by Muppeteer Frank Oz with lots of eye candy and expert detail of 1960 with a creme de la creme cast of comic geniuses. Outstanding especially is Martin as the sadomasochistic dentist a la Elvis and his scene with pain on the brain patient Murray (pricelessly hysterical in the role made famous by a young Jack Nicholson). Great creature visuals of “Audrey II” with voice provided by Four Tops leadman Levi Stubbs. Greene does a memorable turn as the abused heroine Audrey whose best described as Marilyn Monroe and Carol Channing purreed into one; sad sexpot with a lot of spunk and heart. Memorable songs particularly the show stopper “Suddenly Seymour”.