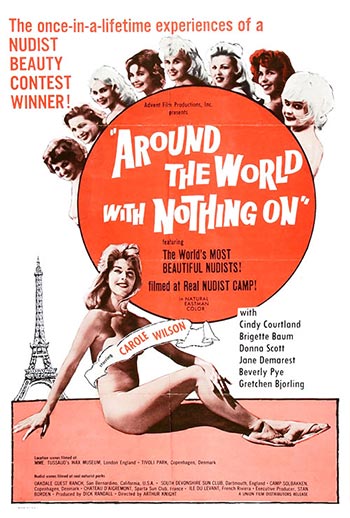 Also known as Around the World with Nothing On, this cheerful Swiss-made travelogue once again demonstrates that despite running around naked all goddamn day, nudists are not sexual perverts but, instead, decent folks who just love wallowing in nature. In fact, the only thing a nudist really has a jones for is Lust for the Sun!

Our first stop is England’s Woburn Abbey where the Duke of Bedford has allowed his grounds to be rented by the Congress of Nudists “without hindrance from His Grace and safe from the sly glances of day trippers.” First thing the Nudists do is set up tents then, yup, play volleyball! Just like on a camping trip, they also sit around singing and eating. And there’s something about eating in the raw that looks particularly unappetizing….

We then go up to the top of a mountain high in the Swiss Alps where four naked young ladies leave a nice warm cabin to romp around completely bare-ass in the snow. They roll around in the snow and have a naked snowball fight and build a naked snowman, then go rolling down the side of a hill like beautiful Naked Snow Fools.

From there, it’s off to France and a stop at the infamous all-nude Isle of Levant where unclothed tourists – all of whom seem to be perfectly-shaped young women or muscular young men – scamper around dangerous-looking rocks and cliffs like glistening naked ants. When not scampering, they also go skinny-dipping and scuba-diving in the crystal clear waters – hey, watch out for those crabs! We also gaze at that exotic European specialty: beautiful topless women with hairy armpits.

Our final destination is the “primitive” Isle of Cavallo, off Corsica, which looks like a small Mediterranean village except, of course, everyone wanders around with their tits and asses on display: “In the evening there was the camp fire and as the lamps are lit, we can sit and watch the glory of the setting sun knowing that somewhere in another part of the world it is rising again to greet people like us… with nothing on!”

Colorfully picturesque with plenty of nudity – all carefully composed to avoid showing any of that naughty genitalia – Lust for the Sun is a typical, breezy nudist film, propelled by ultra-dry narration that makes all the nakedness seem even more surreal. Made in Switzerland in 1958, released in the U.S. by Warner Barclay Productions in 1961, and co-produced by exploitation king DICK RANDALL (The Wild Wild World of Jayne Mansfield), it gives the viewer as much nudity as the law would then allow without anything overtly sexual as to arouse the local censor boards that still plagued America in the early 1960s.