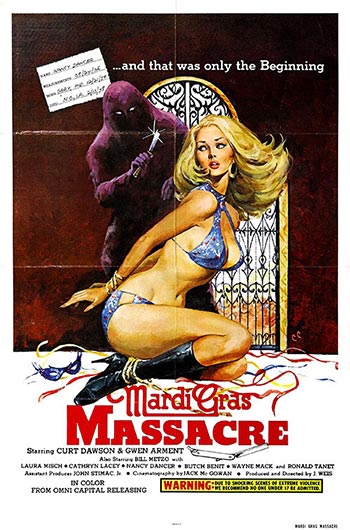 Low rent semi-remake of Blood Feast (1963) – the movie that broke the barrier in showing gore on screen. “Mardi Gras Massacre” is a sleazy trash with misogynistic murders and tons of hilarity. It surely is one of the most unintentionally amusing experiences one can have.

New Orlean is a dangerous city. There is a killer on the loose. The butcher of strippers and hookers. He is looking for evil women. He narrows his eyes and says to his female victims “I am looking…for someone…Evil!” then asks “Are you evil?”. This gentleman killer, who orders Chinese Food delivery for one of his sacrificial lambs, has an Aztec fetish, so he wants to tie naked ladies to an altar and sacrifice them to some bloodthirsty Aztec god.

“Mardi Gras Massacre” delivers tons of full-frontal nudity, sleaze and a bit of nasty gore. There’s also an incredibly poorly acted subplot surrounding the cop investigating these ritualistic murders falling in love with one of the hookers. The funniest thing is that “Mardi Gras Massacre” was classified as a video nasty.