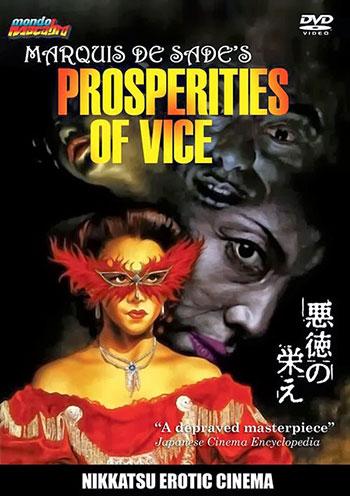 A decadent count in 1920’s Japan becomes obsessed with the life and works of the Marquis de Sade. He creates a theatre to show plays adapted from the notorious writer’s novels and recruits thieves, prostitutes and low lives to act out his fantasies on stage for the delectation of his rich, jaded friends. In search of new sensations the nobleman orders one of the actors, on pain of death, to make love to the nobleman’s wife while he watches. Unfortunately, this incursion of real life into his fantasy world will have dire consequences for the count and his divinely decadent coterie.

Sumptuously filmed by one of world cinema greatest stylists – Akio Jissoji, famed director of the Ultraman series – this surreal and beautiful film is full of startling images. With a gripping and dramatic storyline, it’s a feast for the eyes as well as the mind. This is the first time the film has been released outside Japan. A classic waiting to be discovered.