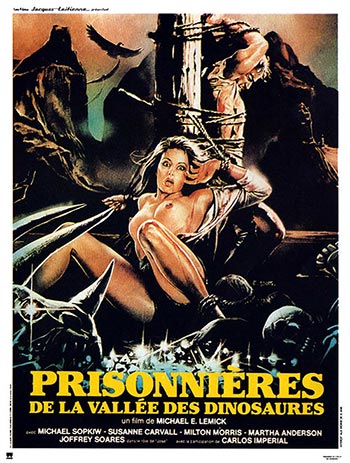 Michael Sopkiw hitches a ride to Brazil to dig up some dinosaur bones. Once in Brazil he gets in a few tangles with the locals and manages to secure a ride on a charter flight deep into Amazonia. All hell breaks loose as the plane crashes deep in the heart of the jungle, leaving Sopkiw, megalomaniac Soares, and a bunch of super models on their own to trek back to society. The group runs into cannibals, quick sand, murderous animals, and a renegade mine run by slave owners.

The film is more along the lines of adventure flicks such as Sergio Martino’s Mountain of the Cannibal God than disgusting gore flicks like Cannibal Holocaust and Cannibal Ferox. The plot follows a palaeontologist who hitches a lift to Dinosaur Valley. However, the plane ends up going down – and then we follow the palaeontologist along with two fashion models, a professor’s daughter, a Vietnam Vet and some guy with a moustache as they try to get out alive.

The main reason why this film works is because of a hilarious lead performance from Michael Sopkiw. His performance is half Kurt Russell and half Treat Williams; so as you can imagine, every scene he features in is a treat. He’s not believable in the slightest as a palaeontologist, but he plays his role as a ‘courageous’ American perfectly, and his action scenes are carried off well. The film features all the sex and gore that is synonymous with the Italian cannibal films. The gore isn’t as strong or relentless as in some of the others, but the scenes that do feature are more than worthwhile for the gore fan. There’s a lesbian sex scene, which is always nice and most of the female cast end up baring their breasts. Director Michele Massimo Tarantini does a good job of creating the jungle setting, as the locations look realistic, thus making it easy to believe that the characters really are in a desperate situation. This film won’t do much for people who are expecting a sick gore fest, but providing you go into Massacre in Dinosaur Valley knowing that it’s a somewhat tongue in cheek adventure film; there’s a lot of fun to be had.