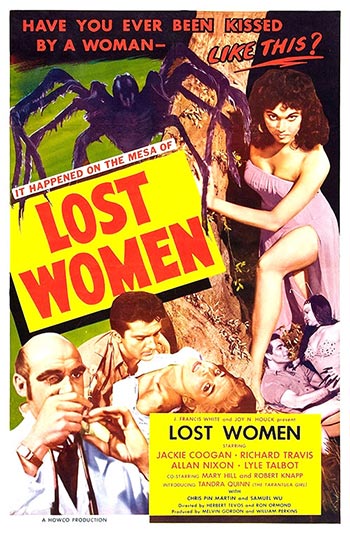 A mad scientist named Arana is creating giant spiders and dwarfs in his lab on Zarpa Mesa in Mexico. He wants to create a master race of superwomen by injecting his female subjects with spider venom.

This is one of the most inane pieces of grade Z film making ever achieved! It truly is ‘so bad it’s good’. Hilarious. The worst acting, the worst giant spiders, an incredibly bad ‘spider dance’ by Tarantella (pronounced ‘Tarantula’), and the riotous site of Harmon Stevens (as Dr. Masterson) grinning like an idiot at everyone. And, one of the most grating soundtracks imaginable. A Mexican guitar jangling a couple of chords interspersed with jarring, discordant piano plinking (loudly, too) made the whole thing nearly unbearable. What a mess.