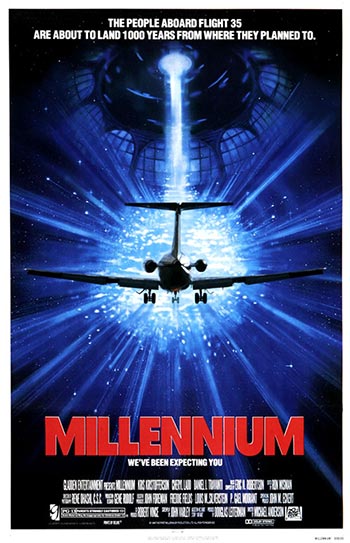 An investigator seeking the cause of an airline disaster discovers the involvement of an organisation of time travellers from a future Earth irreparably polluted who seek to rejuvenate the human race from those about to die in the past. Based on a novel by John Varley.

Millennium is one the few movies about time travel that stays true to the original source material. This far-out John Varley narrative is brought to the screen as faithfully as can be imagined. If you’ve ever wondered what really happens during so-called “natural” disasters, this is the script for you. The film is pure science fiction — fun to watch, but impossible to understand unless close attention is paid. Stay awake and you’ll be astonished by this story. Kristofferson and Ladd are surprisingly well paired, and the time-traveling Ladd is 100% believable in this mind-bending scenario. The sole jarring note is the voice-over coda at the end of the film — an un-credited Churchill quote that sounds comical and out-of-place. This is one of the most under-appreciated movies of the ’80s.