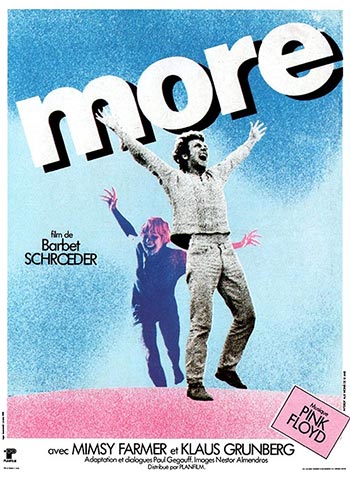 In the late 60’s, after graduating in Mathematics, the German Stefan Brückner hitchhikes from Lübeck to Paris to see the world without money. He befriends Charlie in an arcade and they go to a party. When Stefan meets gorgeous American Estelle Miller in the party, Charlie advises him to stay away from her. However, the straight Stefan falls in love with Estelle and after breaking in a house with Charlie to rob, he follows her to Ibiza. Stefan seeks the hotel of his fellow citizen Dr. Ernesto Wolf where Estelle is lodged. He asks her to leave the place and stay with him in an isolated seaside house. Before leaving the hotel, Estelle steals some money and a pack from Wolf. Sooner Stefan learns that Estelle had stolen 200 doses of heroin and he decides to try one fix with her, in the beginning of his trip to hell.

“We were outcasts of our own micro-society” observes the doomed protagonist of Barbet Schroeder’s 1969 cult curio. Specifically, he’s talking about being a junkie, during an era when hash and LSD were considered more conducive to peace and love. But he could also be talking about More itself.

Pink Floyd aficionados may know it, if at all, for the band’s soundtrack (even then, the film manages to misspell Dave Gilmour’s name); but compared with classic head fare like Easy Rider or Performance, More is something of a bejewelled footnote.

Says Schroeder, it’s “less a story of its time, more a timeless tragedy”, and this contemporary staging of the Icarus myth is indeed an eternal tale of crash and burn. And yet this fascinating document positively reeks of the late-1960s from every pore. Exquisitely photographed (on location in Ibiza), and seductive and patience-testing by turns, it’s a trip alright, but a smarter and more sober one than you’d expect.