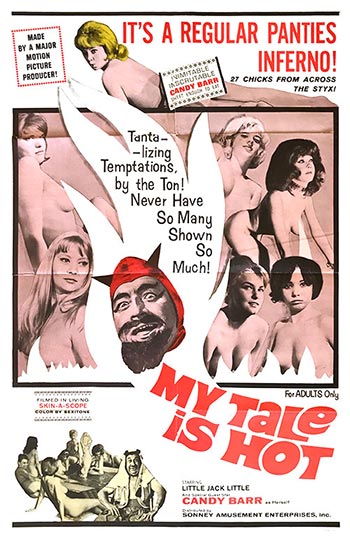 Lucifer is unhappy: too few new souls in Hell. So, he bets his wife Saturna that he can get the world’s most faithful husband, according to “Ladies’ House Companion” magazine, to forsake that faithfulness. Lucifer visits the husband, Ben-Her Ova, and his doting wife, Miassis. At first, none of Lucifer’s ploys work: a backyard swimming pool with one bathing beauty, the same pool with two bathing beauties, a peek at the new maid. Then, Lucifer escorts Ben on a night on the town: will liquor, barmaids, a burlesque show, a hotel room, a Turkish bath, and a special commercial during Ben’s favorite TV show (Walt Disney) finally turn Ben’s head? What’s the secret of his will power?

“My Tale Is Hot” is one of the countless titles in the nudie cutie genre. If you’re a fan of those, this’ll be entertaining. Its very cheap, even more tawdry than expected. The sets are all chintzy and obviously filmed on indoor and impoverished sets. Thats part of the charm though. Despite all the nudity, its lack of any actual sexual content lends a degree of innocence to the proceedings. This is all one big burlesque show essentially, full of bad (but still reasonably funny) jokes from the lead comics. Sure, the film exists merely for the strip sequences, but (as with all of these films) they go on for far too long. However, the women are reasonably attractive (espescially the obviously post-inserted sequence with the legendary Candy Barr) by the standards of the genre.