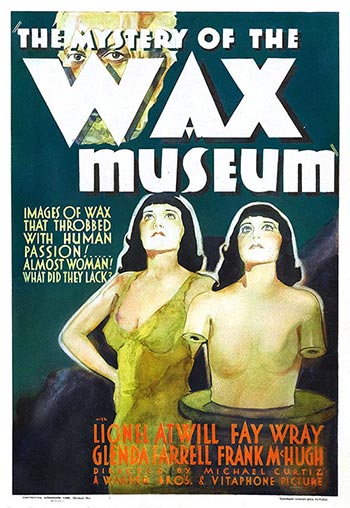 In London, sculptor Ivan Igor struggles in vain to prevent his partner Worth from burning his wax museum…and his ‘children.’ Years later, Igor starts a new museum in New York, but his maimed hands confine him to directing lesser artists. People begin disappearing (including a corpse from the morgue); Igor takes a sinister interest in Charlotte Duncan, fiancée of his assistant Ralph, but arouses the suspicions of Charlotte’s roommate, wisecracking reporter Florence.

The beauty of two-strip Technicolor rendering sensual pastel tones and settings in London (1921) and New York (1933), art direction by legendary Anton Grot, Orry-Kelly gowns, Lionel Atwill at his maddest and Fay Wray in all her splendor, make this one of the finest horror films of not only the 30s but of all time. The pace of this film is fast, the comedy relief enjoyable but not detracting from its story. Atwill imbues his character of Ivan Igor with all the menace and evil he could muster (and that was calibrated in tons!). Fantastic fun and candy for the eyes with all that streamlined Art Deco grandeur!