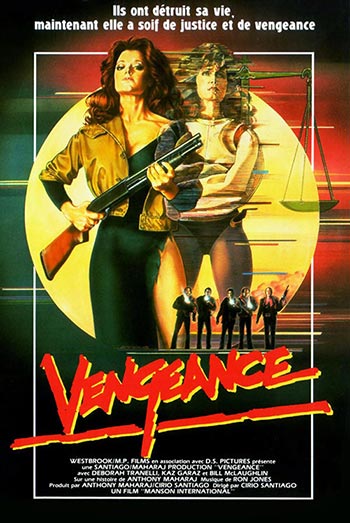 Carla Harris, a beautiful but not so successful actress from L.A., witnesses how her husband is tragically killed in an attempt to save a woman from her male attacker. She travels to her parents’ home in a small town in the mountains to get some rest only to be repeatedly harassed by redneck locals and a teenager. The local sheriff refuses to help and so it all ends up in a gang rape and with Carla’s parents shot dead. Carla survives and escapes from the mental hospital to seek bloody revenge.

Naked Vengeance has basically the same story as the slow moving “I Spit On Your Grave” which mas made a few years earlier. But this is much better than the original and offers much more than you would expect from a low budget exploitation film. Slick and effective direction by the ever resourceful Santiago, a fast pace, and a remarkable acting job by Dallas star Deborah Tranelli (who also sings the title song!) make this a movie experience you won’t soon forget.