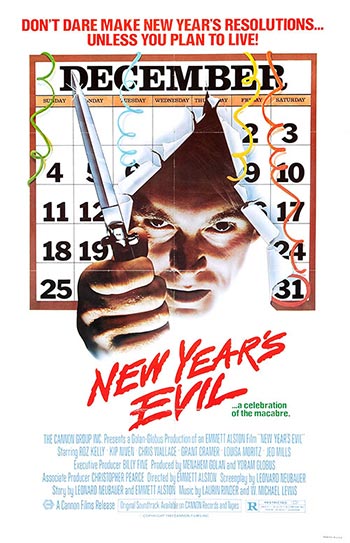 New Year’s Eve is on it’s way and TV’s most famous punk-rock lady icon Diane Sullivan is holding a late hour countdown celebration of music and partying. All is going well until Diane recieves a phone call from a odd sounding stranger announcing on live Television that when New Year’s strikes in each time zone, a ‘Naughty Girl’ will be murdered (punished), and the killer leaves a threat saying she will be the one to die last. The studio crew takes precautions and highten security, but on the other side of America, a hospital nurse is found brutally butchered. Who could be behind these murders? A crazed fan, a religious psychotic, or perhaps it’s someone much closer to Diane then the police (or audience) could have ever expected.

What makes this film so unique is that the killer is actively a part of the story. In fact, he seems to be on screen more than anyone else. His motives are unclear, but his face is not — he is not a soulless, faceless stalker in the night like Michael Myers or Jason Voorhees. You might even say he is the protagonist, if you are the type to root for the bad guy.

The general concept of killing a person off each hour on the hour is both simple and effective. The characters are also interesting, the film shot very well. It ranks on the top shelf among slasher films, and captures the late 1970s and early 1980s well.