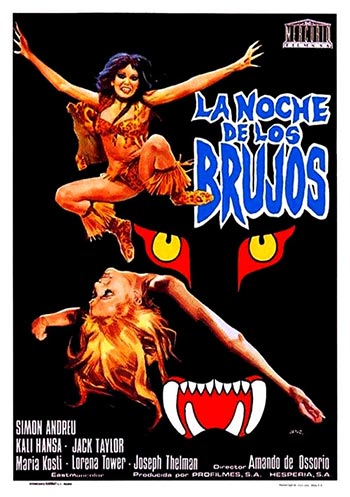 A team of researchers travel into the African jungle to study the mysterious disappearance of elephants in the area. Instead they discover a tribe of voodoo-zombies who rise from the ground, capture the women, whip them and slice their heads off on an altar. The women return as vampires who look for more women to kill.

Writer/director Amando De Ossorio delivers plenty of tasty gratuitous nudity, a smattering of grisly gore, a smidgen of steamy soft-core sex, and even a reasonable amount of misty’n’spooky gloom-doom atmosphere. De Ossorio treats the silly story with utmost seriousness, which in turn adds considerably to the film’s tacky charm. The cast all give acceptable performances; the ubiquitous Jack Taylor in particular does well as a stuffy professor. Better still, the women are all very hot and attractive: Kali Hansa, Maria Kosti, Loreta Tovar and Barbara Rey. Francisco Sanchez’s bright, polished cinematography (the occasional use of stylized slow motion is really nifty), the endearingly crummy dubbing, and Fernando Garcia Morcillo’s funky-throbbing tribal score further add to the overall trashy fun.