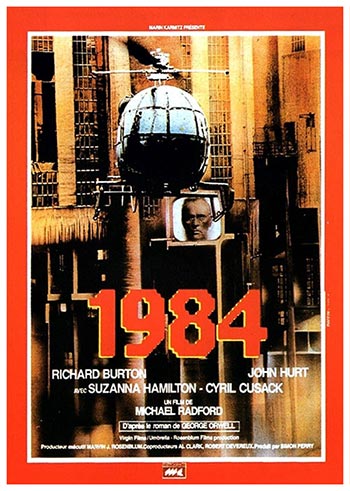 After The Atomic War the world is divided into three states. London is a city in Oceania, ruled by a party who has total control over all its citizens. Winston Smith is one of the bureaucrats, rewriting history in one of the departments. One day he commits the crime of falling in love with Julia. They try to escape Big Brother’s listening and viewing devices, but, of course, nobody can really escape…

1984 is a serious, thought provoking, highly intelligent piece of seminal sci-fi that has lost none of its power in translation from print to screen and the basic story so brilliantly realised by George Orwell in 1948 is just as relevant today as it ever was.

Writer/director Michael Radford has done a remarkable job capturing the bleak world as dreamed up by Orwell and portraying it on the screen. His script adaption of the story is truly worthy of the source material, in fact this adaption to screen is so faithful that many may be put off by it’s relentless bleakness and sense of despair and hopelessness as presented by Radford (and as originally conceived by Orwell), but those willing to take this journey will be rewarded with a truly powerful film experience unlike just about anything committed to film previously or since.

The acting is superb on all accounts, with John Hurt and Suzanna Hamilton both perfectly cast as the lovers seeking comfort in each others arms despite the fact that their very love is punishable by torture and execution, however the best performance of the film comes from the late Richard Burton (in his final screen role) as the calmly menacing O’Brien who managed to seem both chilling and human and the same time. In fact Burton’s performance here is both a mesmerizing tour de force and a lasting testament to his skill and talent as an actor. Also special note must be made of the wonderfully surreal music by Eurythmics and Dominic Muldowney that fits into the atmosphere of the film seamlessly. Utterly superb.