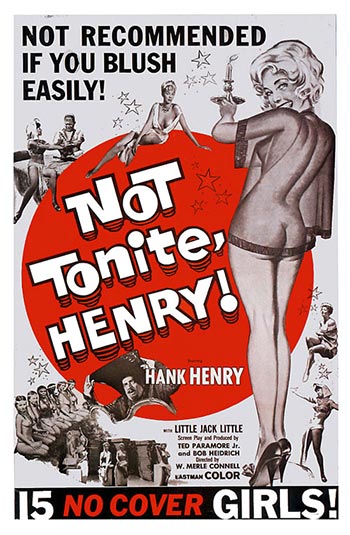 One of the early color near-nudie films and was re-shown often by, mostly, drive-in theatre owners in need of a quick cash fix. They would hang out the “Adults Only” sign, thereby ensuring that every high school and junior high boy (and more than a few dads) within an hour’s drive would storm the gate, and turn on the pop corn machine and then hot-foot it to the night-deposit at the bank. “Not Tonight, Henry” (the actual title and not an alternate title as some seem to think) was a large step up in quality for director W. Merle Connell in that it was in color and also not just a static-camera filming of a burlesque show inside of one of L. A.’s smoky, grind house burlesques. The girls were still out of burlesque, as were Hank Henry and Little Jack Little: Hank Henry is more than a little frustrated at the “lack of attention” he is getting at home from his wife and starts dreaming up amorous escapades with sirens from the past…