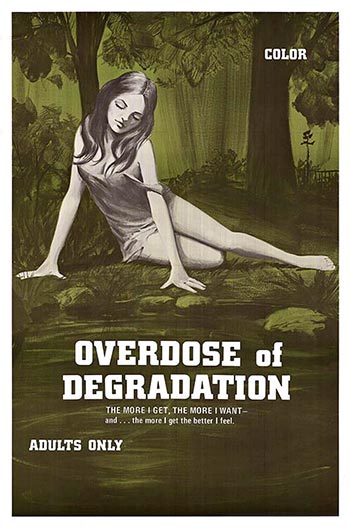 Jennifer, played by a perky bad actress, wanders around a park while she tells the audience all about her sexual escapades. She’s a wild and crazy hippie type (“I left more than my heart in San Francisco”) who tells us that she became interested in sex when a perverted man tried to fondle her chest when she was a little girl. (WHAAAAAAT?????) Then she tells about a sexual encounter that went awry when her date began biting her.

Later on, she fills her bathtub with milk and climbs in. Then she gets raped by some idiot while walking through the park. She’s rescued by a female friend, who takes her home and, weirdly oblivious to the fact that her friend JUST GOT RAPED, introduces her to the joys of lesbianism. All though this goofy movie we get brief (and lame) “psychedelic” interludes where lights flash on the screen and kaleidoscope patterns appear. Because, like, you have to appeal to those Summer of Love types.

It’s all fairly weird and tasteless–and really nothing special, all things considered. But the narration is entertainingly off the wall. At one point, Jennifer tells us that she still likes to come to the park, despite having been raped there, because (quote from memory) “girls get raped all over; actually, they get raped in the same place, just in different locations.”