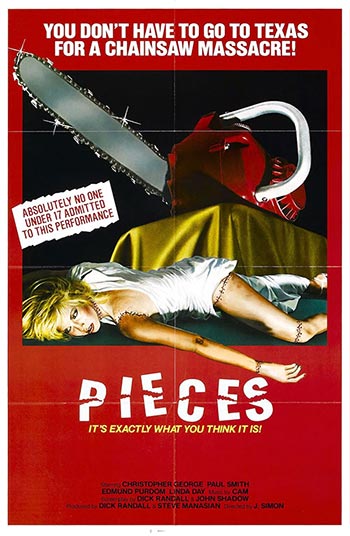 Audio 2: Commentary with The Hysteria Continues

While playing with a puzzle, a teenager is repressed by his mother, and he kills her and severs her body with an ax. Forty years later, in an university campus in Boston, a serial killer kills young women and severs their bodies in parts, stealing body pieces from each student. Lt. Bracken makes a deal with the dean of the campus, and infiltrates the agent Mary Riggs as if she were a tennis teacher and together with the student Kendall, they try to find the identity of the killer.

It is a rare cinematic occurrence indeed to find such delightfully sleazy ingredients as chainsaw massacres, disco aerobics, on screen vomiting, pornographic jigsaw puzzles, a girl wetting her pants, and a guy salivating over a woman’s feet all in one place. Only from the combined minds of Joe D’Amato, Dick Randall, and J. Piquer Simon could such a thing spring forth – and judging from the number of reviews here, I’m not alone in my fondness for this movie.

Many of the cast members will be familiar to fans of these kinds of movies. Christopher George (having already been through Graduation Day and a trip to the Mortuary) is a strong lead as the no-nonsense detective on the case, while Jess Franco veteran Jack Taylor creeps around the increasingly decimated campus as an anatomy professor. Of course the victims are just anonymous dead meat, but then that’s all they need to be.

Say what you will about the overall quality of the film, but one thing’s for sure – Pieces doesn’t suffer from a lack of blood and guts. The crimson stuff flows freely once the chainsaw starts up, and the movie actually lives up to the surprisingly honest tagline – `it’s exactly what you think it is’ – take it or leave it. And the ending – what an ending!