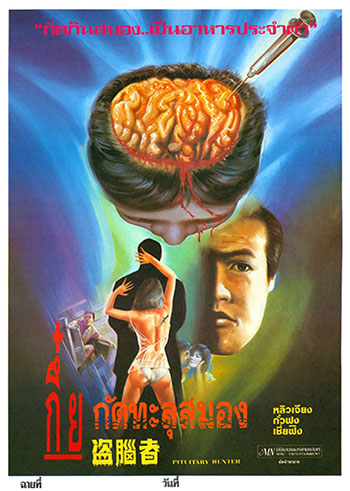 In his quest to find a counter-agent that will ‘cure’ his daughter’s dwarfism, unregistered backstreet physician Dr. Kwok uses pituitary glands stolen from corpses at the local mortuary; but when several murder victims are also found to be missing their pituitaries, it looks as though the doctor’s obsession might have driven him to kill. Is Kwok really a psycho, and if so, how will this affect his relationship with sexy hooker Manna, BFF of one of the recently deceased?

It’s got several gratuitous sex scenes and a fair few grisly murders, and yet the wonderfully titled Pituitary Hunter is remarkably light in terms of nudity and splatter. It doesn’t matter much, though: a prime example of dwarfsploitation, all given the sort of spectacularly un-PC treatment that only the Asians seem capable of, this crazy Cat III flick is a whole lot of demented fun.

Terrible subtitles result in unintentional hilarity; animals are mistreated with alarming regularity (a renegade geek is lured from his sewer hidey-hole by a live duck dangling on a rope); a pair of Chinese bodybuilders perform a cabaret act in a disco; a psycho dwarf on stilts gets stabby with a whore: this is so trashy and jaw-droppingly insensitive at times that avid Cat III fans should still get a kick out of it, despite its lack of bare skin and graphic gore.