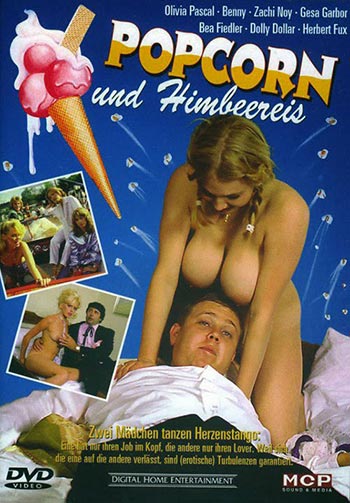 Popcorn und Himbeereis (1978), which translates literally as Popcorn and Red Raspberry Ice Cream, is a German sex comedy. Olivia Pascal withdraws a large sum of cash for her and her girlfriend’s vacation. She gives it to girlfriend Gesa Thoma, who promptly has sex with her boyfriend in a furniture warehouse and loses the money in a bed. When they realize the money is gone, they return to the warehouse, but the beds have all been picked up for delivery. They immediately set off by train to follow the money. Along the way, they make friends with Zachi Noy, who helps them rip off a ticket from another passenger. It turns out they are all headed for the same hotel, where many of the beds were delivered. That is pretty much the story arc. The girls search the hotel, a convent and a hospital for the right bed, and all of the women get naked a lot.

There are shower scenes, guys in drag as nuns, harassed priests, and much more. This is pure corn and slapstick. For instance, Zachi Noy gives Dolly Dollar what looks like a bracelet box near the end of the film, but which is actually a selection of condoms. When a biker picks up a “tiger lady” at a disco and takes her to bed, he doesn’t realize she is a meter maid until he sees her ticket his bike in the morning.