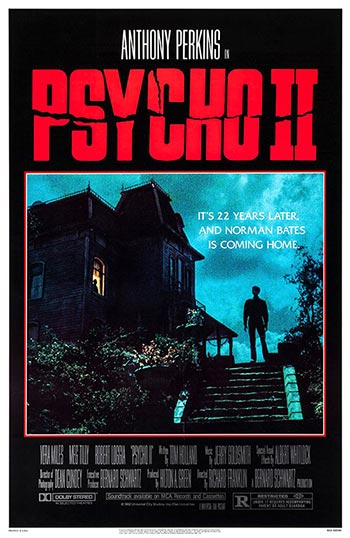 Now declared legally sane, Norman Bates is released from a mental institution after spending 22 years in confinement over the protests of Marion Crane’s sister Lila Loomis, who insists that he’s still a killer and that the court’s indifference to his victims by releasing him is a gross miscarriage of justice. Norman returns to his motel and the old Victorian mansion where his troubles started, and history predictably begins to repeat itself.

Psycho II is, without a doubt, the greatest sequel of all time. Having to make a follow-up to a film as unique and wonderful as Psycho seems like an impossible task, but director Richard Franklin and brilliant writer Tom Holland knew how to pull it off. This isn’t a rip-off of the original like some sequels are; this really stands on its own. It’s unpredictable, chilling, gruesome, exciting, interesting, and surprisingly touching.