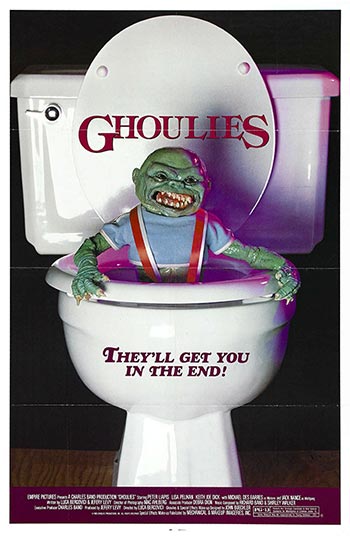 Take a creepy old Hollywood mansion, a naive young man and a pretty girl. Add an over-the-top orgy and some slimy, winged goblins who crawl out of toilets, and you have Ghoulies, a horrifying and hilarious ride into the darkest regions of hell! Conjured during a party thrown by the mansion’s new owner, the hairy, fanged demons waste no time wreaking havoc on the scene: and declaring the unsuspecting owner their new lord and master! Peter Liapis (Ghost Warrior), Lisa Pelkin (Jennifer), Michael Des Barres (Waxwork II, Under Siege) and Jack Nance (Eraserhead, Twin Peaks) star in this fanged frenzy of sharp twists and eye-popping shocks that’ll get you where it counts!