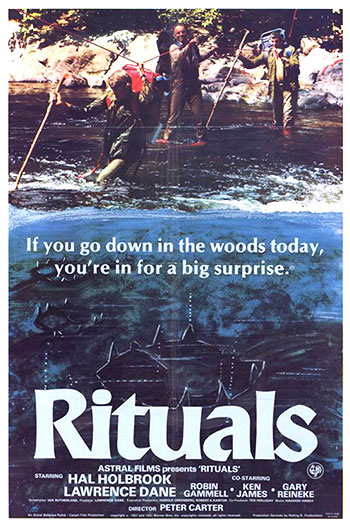 Five doctors go on vacation deep in the Canadian wilderness. After all but one pair of the party’s shoes disappear, the remaining shoed camper decides to hike out and go look for help. Soon after he leaves, however, his four companions realizes that something is very wrong when someone leaves a decapitated deer head just outside their camp. Even though they still don’t have their shoes, they decide to follow their friend’s trail out of the woods, but their path is blocked by someone who doesn’t want to see them leave the forest alive.

This almost completely unknown Canadian slasher is one of the best low-budget horror films ever made.Often compared to “Deliverance”, it certainly has a similar theme. The film brilliantly conveys an atmosphere of total dread and fear, the feeling of losing control of the world around you. The climax is extremely eerie and haunting. There are some truly unsettling moments like the scene where one of the doctors is strung up, pleading for help whilst getting burned alive. “Rituals” features some striking shots such as the killer’s lone silhouette watching from the horizon which elicit an ominous and almost unbearable sense of dread. This obscure horror flick is even better than “Just Before Dawn”, so if you are a fan of slasher flicks you can’t miss it.