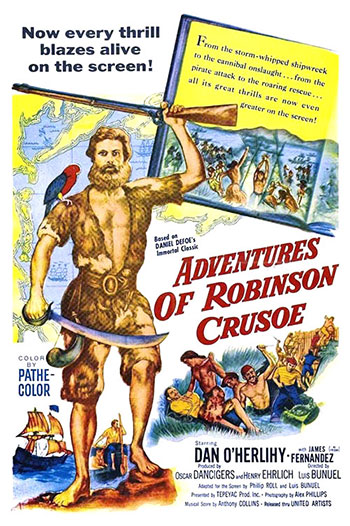 On 30 September 1659, the aristocratic British Robinson Crusoe’s ship sinks and he miraculously survives on a deserted island somewhere in South America. He retrieves a dog, Rex, and cat, Sam, from the shipwreck together with some supplies, weapons, clothes and tools and builds a shelter. He soon learns how to survive by cooking, farming, harvesting the crops. Then the loneliness begins to haunt him, especially after the loss of Rex. When he sees a group of cannibals in the island, tension and fear become part of his life. Later he saves the life of a savage that was going to be eaten by the cannibals; he names him Friday and they become friends. When Robinson Crusoe sees Caucasians on the island, he finds that Captain Oberzo was the victim of a mutiny and he helps him to retrieve his ship.