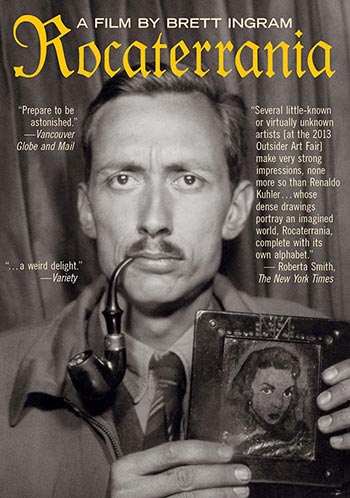 A journey into the secret world of 76-year-old Renaldo Kuhler, a scientific illustrator who invented an imaginary country to survive his disaffected youth.

“Each person is his own nation, and what he does with that nation is up to him,” says Renaldo Kuhler, an artist who has embraced this philosophy in his own unique way..

Kuhler is an eccentric gentleman in his seventies who coped with an unhappy childhood by sometimes retreating into an imaginary world; however, while many kids indulge in fantasies, Kuhler, who had a talent for drawing, began putting them on paper, and as he grew up and enjoyed a career as a scientific illustrator, he continued to document the history and geography of Rocaterrania, a small nation tucked between the U.S. and Canadian borders near the Adirondacks mountains that doesn’t really exist.

Kuhler has created methodically detailed maps of the imaginary country and illustrations of its architecture, costumes, armies and leaders. Filmmaker Brett Ingram offers a look into this mythic land and the man who has willed it into being in his documentary Rocaterrania, which was an official selection at the 2009 Cinequest Film Festival.