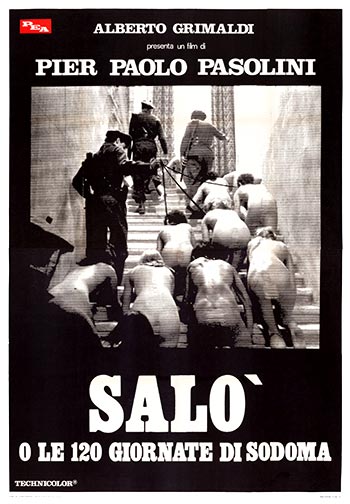 Set in the Nazi-controlled, northern Italian state of Salo in 1944, four dignitaries round up sixteen perfect specimens of youth and take them together with guards, servants and studs to a palace near Marzabotto. In addition, there are four middle-aged women: three of whom recount arousing stories whilst the fourth accompanies on the piano. The story is largely taken up with their recounting the stories of Dante and De Sade: the Circle of Manias, the Circle of Shit and the Circle of Blood. Following this, the youths are executed whilst each libertine takes his turn as voyeur.

Despite being almost 40 years old, Salo is probably the most cruel and repulsive film ever made, not just here in Italy but in the whole world. It depicts the worse atrocities inflicted to humans by humans. The true dark side of human nature: When evil is born out of simple boredom, when it comes naturally. It is a necessary evil if you can endure it.