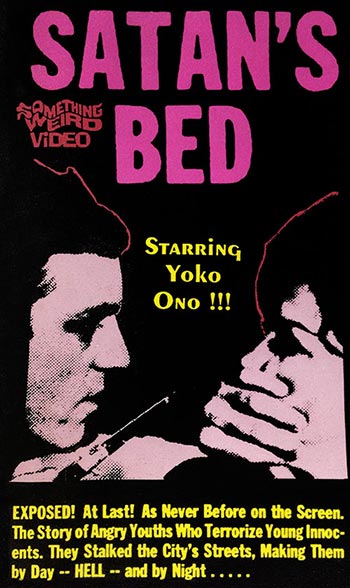 This brutal drug drama (actually two films edited together) features Yoko Ono as the fiancee of a drug pusher who wants to go straight. His supplier kidnaps Ono in order to keep him selling dope, while in an unrelated story three black-clad addicts terrorize women.

This amazing time-capsule is a must-see primer for psychotronic movie fans. Like many other 60s grindhouse efforts, it outrageously combines more serious footage from an unreleased pic with unrelated and mismatching exploitation fare. In this case, the exploitation is provided by the incomparable Findlays (of “Flesh” trilogy fame), whose shadowy lit rape-fantasy shenanigans provide a stunning example of the “roughie” genre, mixed precariously with j.d. and lesbian-leather elements. Add to this the bizarre celebrity angle (a young Yoko Ono, threatening to, but thankfully never appearing in the nude), the lack-of-live sound and filmed-in-someone’s backyard technique common to such features, and you have an absolute compendium of 60s sleaze stylings. The naked-girl-tied-to-a-pool-table opening itself is worth the price of the video, not to mention the half-naked girls hiding in trees.