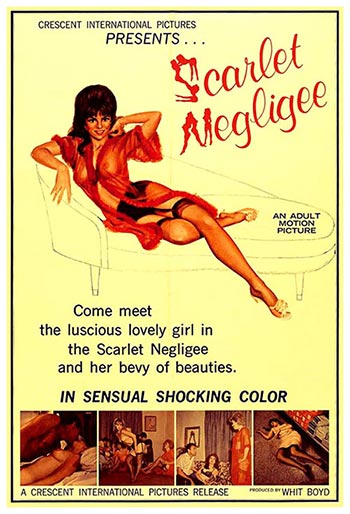 Killer criminals hiding from the law in a whorehouse = White Trash True Love! Yup, that’s the plot of Scarlet Negligee, a robust bit of southern sleaze, from those marvelous days when anyone with a camera thought they could make a movie — and not only did, but got the damn thing into theaters!

Three thugs — Craig (the dubiously named BYRON LORD), bearded Joe (director RON SCOTT), and Billy Boy (GENE WILSON) — rob a supermarket in broad daylight. (And it’s a real supermarket, not a set, making one wonder just how the hell they got permission.) But things go bad almost immediately when Billy Boy shoots an hysterical woman in the back, leaving her to die in Aisle 5 — “Yes, another senseless killing!” — moments before another customer, Miss Catherine Benson (NANCY REEVES), inadvertently yanks Craig’s mask off when he starts manhandling her: “It was an accident!” Realizing she can identify him, Craig takes her hostage as the trio absconds with thirty grand, and proceeds to beat the crap out of her in the back seat of the getaway car as it careens down a Texas highway.

The gang then decides to hide out somewhere safe — which, in the wonderful world of sexploitation, means crashing a whorehouse run by Madame Rita (SHIRLEY BOYD), “a broad with a warped mind.” Catherine doesn’t like the idea — “You think you’re Miss Goody Goody, don’t you?” — and neither do Craig’s two partners who discuss with him the finer points of law: “Man, you’re crazy! This is kidnapping!” “What difference does it make? You just shot that dame!” “Yeah, but the Feds will be in on this thing!” “Oh, forget it will ya! Just don’t sweat it!” With her hands bound together, Catherine is kept in a room and made to look like one of Rita’s other girls by being made to wear a negligee. (Nope, a black one.)

The rest of the plot is simple. Whores in high hair party with the boys while Craig and Catherine — quite inexplicably — fall in love. It starts after Joe’s been asked to guard her and, drunk, he climbs atop her instead: “Don’t fight me, honey, I’m nice!” Craig clobbers him and, tying one of her hands to his, spends the night lying next to her. Next morning, she’s impressed: “You didn’t take advantage of me when you could have.” “I wanted you awake.” She gets mushy: “I always thought people that rob and kill… yet you’re so different!” (Say, what?) In fact, Catherine now wants to spend the rest of her life with him and they exchange some wonderful Bad-Movie Dialogue: “If I had a decent girl like you, I’d try again!” “Do, Craig, do!” So they flee the whorehouse, the other two chase after them, and it all ends with a shootout in a collapsed building….

Texan director Ron Scott, who occasionally acted in locally-made gems like Spiked Heels and Black Nylons and Mars Needs Women, also made The Office Party and The Sex Shuffle the same year. Producer WHIT BOYD is probably best known for Dracula (The Dirty Old Man). Texas should name towns after them.