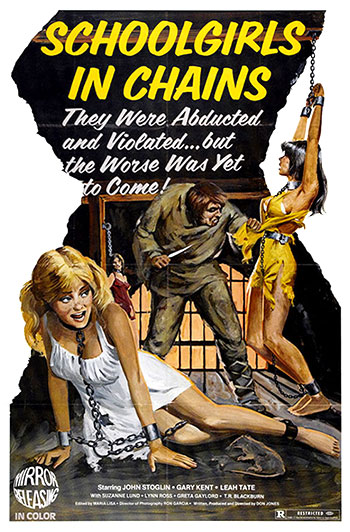 Two deranged brothers, who are under the domineering influence of their crazed mother, kidnap young girls and keep them captive in chains in their basement, where they subject them to depraved “games” that often end in torture and murder.

A gleaming example of “only in the 70s” cinema, this lovably tactless little mud-wallow is a treasure-trove of trash-a-plenty. Incest, torture, nekkid gals, rape, and murder…all the requisite bases are covered, and there’s even some almost-artful production qualities. Sure, the conceptual nuts-and-bolts of SCHOOLGIRLS IN CHAINS might be hackneyed and unoriginal, but this flick injects some pretty edgy nastiness into those worn-out ideas and shoves them straight up your nose. This is one of the very few 1970’s horror movies still refused a certificate from the BBFC.