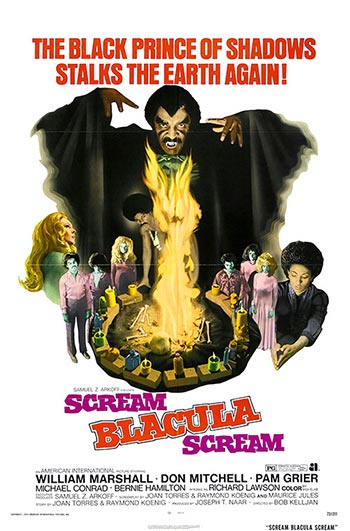 After a dying Voodoo queen chooses an adopted apprentice as her successor, her true heir is outraged. Seeking revenge, he buys the bones of Blacula the vampire off of a dealer, and uses voodoo to bring the vampire back to do his bidding. In turn, Blacula turns him into a vampire and makes him his slave. Meanwhile, a police officer with a large collection of African antiques and an interest in the occult investigates the murders caused by Blacula and his vampire horde.

Scream Blacula is the best of the two Blacula films. It has two of the scariest scenes in horror film history and some of the most ironic and funniest. William Marshall is an excellent actor and his regal portrayal of the cursed black prince. It was quite interesting to see Pam Grier play against type (at the time, at least) as a vulnerable female — who happened to be a voodoo priestess.