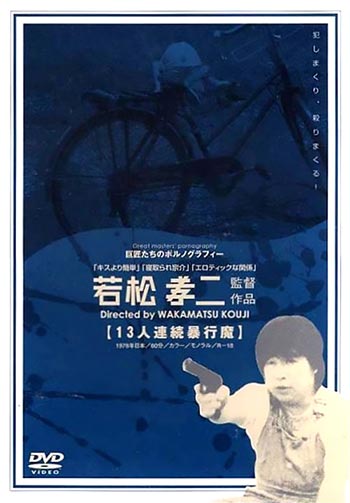 Chronicle thirteen brutal murders of random people following one after another. Anonymous man, inherent bicycle, living in an abandoned shed by the river, spending time on the observation of factory chimneys, listening to the sounds of airplanes taking off. Among raped and murdered victims of the silent man are different people – from police officers lured to the shed.

The Violent Man Who Attacked 13 People” (a loose translation) is deserving of infamy for it is one of the most nihilistic pink films ever made. A chubby, bicycle-riding rapist/killer dispatches 13 people (mostly women) in a cold, bloody, detached rampage. In the first 38 minutes, 8 people die. Koji Wakamatsu, one of the Godfathers of Pink, makes no concessions to anybody in this grim exercise. The killer unloads his gun into vaginas, a man’s ass, arms, legs, and heads. The film appears to be a catalog of murder and rape.

There is no humor and no let-up. Only a minimalist harmonica score is heard in the quieter moments between the attacks. Shot on grainy 16mm, the tone is similar to Yojiro Takita’s 1983 film “Renzoku Boko”, suggesting that Takita was heavily influenced by this film. The relentlessness of the narrative draws the viewer into a process where he (the viewer) becomes anxious about the next attack. As this is a film from the esteemed director of “Go Go Second Time Virgin” and the excellent “Violated Virgins”, a poetry emerges from the images that separates it from standard pink fare.