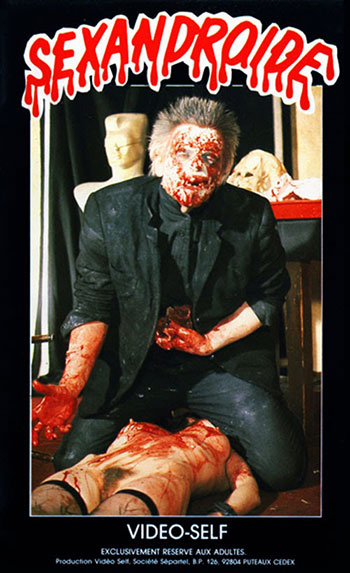 Although this film’s title suggests some kind of raunchy sci-fi about automatons designed to satisfy their owners’ carnal desires, it is nothing of the sort; rather than futuristic fembots, this obscure French anthology delivers a trio of stories featuring a gruesome voodoo ritual, bizarre ‘Grand Guignol’-style performance art, and a naked vampire who dances to Tina Turner!

Story one of three sees a sexy young woman in a bar unaware that someone is out to do her harm via a voodoo doll; when she pays a visit to the ladies room, unseen forces rip off all her clothes, make her bleed profusely, and tear open her throat. Expect plenty of female nudity, and lots of unconvincing blood-letting.

In tale number two, a naked goth chick in a gloomy dungeon is tortured by a snaggle-toothed zombie who pushes needles through her tongue and breasts (a sequence that looks far too convincing for comfort); he then gouges out her eye and stabs her in the chest. Finally, the ghoul cuts into his own arm with a knife, slices open his stomach and pulls out his guts. Expect plenty of female nudity, and loads of blood.

The final story is perhaps the strangest of all: a female mourner is attacked by a cheesy looking vampire who rips off all of her clothes and bites her on the neck, transforming her into a sexy bloodsucker who proceeds to dance badly to a couple of Tina Turner tracks. After strutting her stuff to ‘What’s Love Got To Do With It?’, vamp-gal stops for a canoodle with vamp-guy, who hangs a ‘do not disturb’ sign on the side of his coffin. Expect plenty of female nudity, cheap plastic fangs, and gratuitous gyrating to 80s pop/rock.

Most sane people would undoubtedly dismiss this as unwatchable garbage; on the other hand, those who actively thrive on z-grade exploitation obscurities are advised to scoop this one up given the chance—a more deranged, technically inept, gratuitously sleazy piece of bizarro trash would be hard to find.