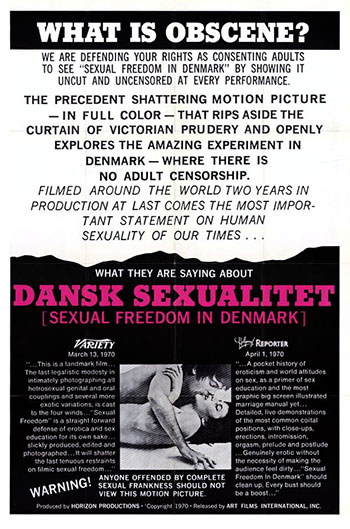 Starting as a documentary on the sexually liberated culture of late-Sixties Denmark, Sexual Freedom in Denmark winds up incorporating major elements of the marriage manual form and even manages to squeeze in a montage of beaver loops and erotic art. All narrated with earnest pronouncements concerning the social and psychological benefits of sexual liberation, the movie, is a kind of mondo film dotted with occasional glimpses of actual sex. Tame by the standards of 1971, when adult loops and features would begin to flood certain metropolitan markets, the film was shocking enough in 1970 to instigate media attention and long lines at the box office.

This movie is about the morality, education, and responsibilties pertaining to sexual freedom. Not only that, it has the most amazing child birth sequence that could and should be used as a training tool and viewed by anyone that is interested in the miracle of child birth. This very insightful movie should be shown in school sex education programs internationally along with material already being presented in that forum, and is and all around must see for anyone deemed mature enough. It is a great introduction to various pertinent aspects in the sexual arena. It’s delightful!