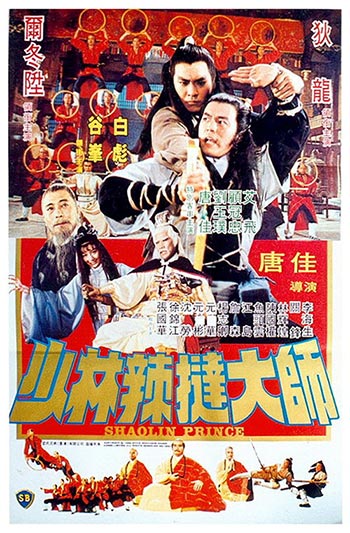 Two princes are seperated by birth. One is raised by the Prime Minister. The other is raised by three mad Shaolin Monks. They both learn kung-fu. When they are 23, they meet and combine there forces to defeat the evil 9th Prince.

As the names of Chang Cheh and Liu Chia-liang became legendary, all-too-often the name of their equally valued collaborator, Tang Chia, is omitted. That may be,because, unlike the previous pair, the veteran kung-fu choreographer only went on to direct three movies of his own. Of course, that makes this trio all the more special, and this first effort perhaps the most special of all. It may be an eye-filling, mind-bending martial arts tale of two royal princes battling for the rightful recovery of the throne, but it’s also a party, where Tang invites two cinematographers, three editors, and no less than five other choreographer friends to almost literally shoot the works. The results are kung-fu configurations not only never seen before, but never even imagined!