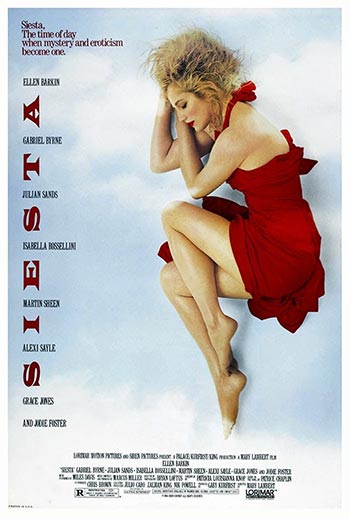 Claire (an American) wakes up in a terrible state at the end of a runway in Spain. As she tries to account for her state (blood-soaked and bruised), she has flashbacks from the past few days. She thinks she’s killed someone, but isn’t sure, and now she’s wandering the Spanish streets without money or a clear memory.

This is a wacky, extreme, insane movie. When she isn’t stalking around in a black leather jacket emblazoned with a bald eagle, Barkin is running madly through Spanish streets in a flaming red dress. She wants to sleep with Gabriel Byrne, who’s married to Isabella Rosselini, who wields a knife, while Julian Sands lowers his trousers for Jodie Foster, who kisses Ellen Barkin on the lips. There isn’t much sensuality, but there are countless tragically, monumentally bad lines. This is a masterpiece of bad taste, kitsch, bad accents, etc. And Barkin is often naked, putting it in five star territory.