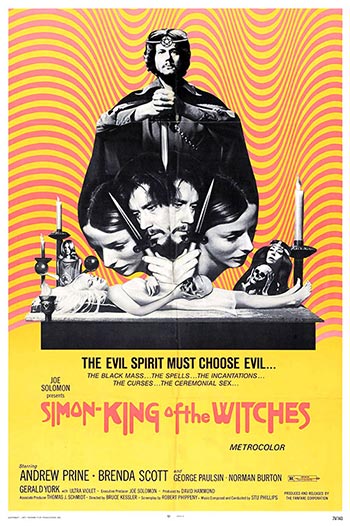 Simon, a young man with magic power, invokes the help of the evil forces in order to take revenge of a man who cheated him with a bad cheque.

Andrew Prine, always a welcome face in B movies, has the lead role as Simon in one of the wackiest, most ‘out-there’ films of the early 70s. Simon is a bohemian magician who lives in a rain gutter, wowing audiences with his mystical talents. When he falls for the daughter of a prominent city official, expected problems ensue which are met head-on by a highly unorthodox rebuttal.

This is a trippy, ‘turned-on’ freakfest, loaded with waggish characters and situational discord…a quite likable film, too, which appropriately features Warhol Factory entouregette Ultra Violet. Sexmagic rituals, psychedelia, and gay overtones contribute to the slappy appeal of this under-appreciated counterculture wonder.