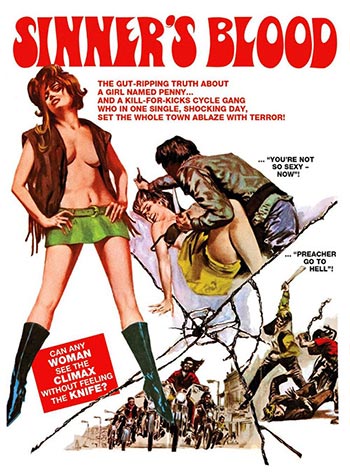 A strange and subversive film, SINNER’S BLOOD seems destined for cult fanfare, yet remains slighted four decades after it was first brought forward. What little there is of a structured narrative concerns the corruption of two sisters when they arrive at their Aunt’s home in quiet little Anytown, USA. There’s evidence of brains and balls beneath the surface of this chiefly garden variety biker picture…the subtle mark of distinction being its illusive, gentle raise of the middle-finger toward ultraconservative American attitudes, and mores fostered by religious guilt.

Some softy sex, psychedlia, and obligatory lesbiana are on-hand to keep things lively!