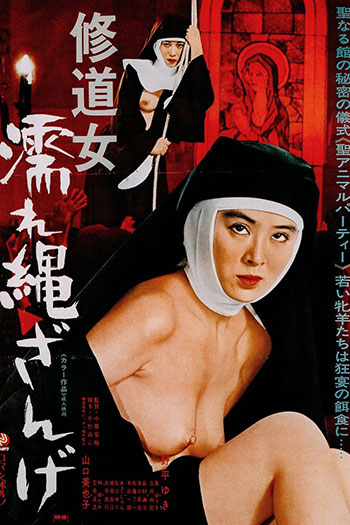 Rumiko is a misbehaving girl who got caught stealing the cash her father had at home for bribes. Father would not accuse her of that, but when he caught her having sex with her English teacher, he was justified in sending her to a monastery, where the nuns try to force her to become a good girl. However, after a few days in forced piety, Rumiko (now Sister Lucia) discovered that her sins were nothing in comparison with those of other Sisters, and Mother Superior’s.

The nunsploitation genre is rather odd anyway, but the Japanese incarnation of it is even stranger than the European versions considering that Japan is not a Christian country! Anyway, the best known nunsploitation films to come out of Japan are Wet and Rope, and the brilliant School of the Holy Beast. Much less well known is this film; Sins of Sister Lucia, but it is about as good as Wet and Rope. The duration is very short at only seventy minutes, but plenty of debauchery is packed in during that time. It’s a familiar story – a bad girl is sent to a convent, only to find that the nuns there are even more ‘bad’ than she is! Anyone that has seen more than a handful of Japanese exploitation films won’t be particularly surprised to hear that this one features plenty of rape. Rape is the main order of the day; but director Koyu Ohara finds time for all the genre staples including torture and lesbian sex. The nuns are all good looking as you would expect, and the film is rather high quality and the cinematography is good. There’s not much else to say about it really. Fans of nunsploitation and/or Japanese exploitation will find it worth tracking down.