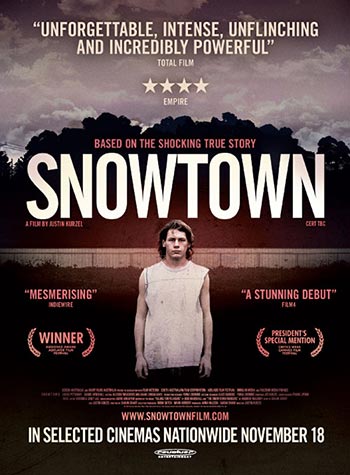 Based on true events, 16 year-old Jamie falls in with his mother’s new boyfriend and his crowd of self-appointed neighborhood watchmen, a relationship that leads to a spree of torture and murder.

This film is based on the horrific true story set in South Australia in the 90s and is about Jamie and his half brothers who live with their mother Elizabeth. Jamie is being molested by his half brother and a neighbor. They are friends with John Bunting, a guy who doesn’t like fat people, druggies or gay people, and he doesn’t care if you know it. Jamie is easily lead and John takes him under his wing. Jamie soon realizes that John is not a nice guy, he comes across nice when his mom and others are around, but shows his true colors when he’s with Jamie. Slowly but surely Jamie’s friends and family start disappearing, and then Jamie is put in a situation he can’t get out of. But is he as innocent as he thinks?