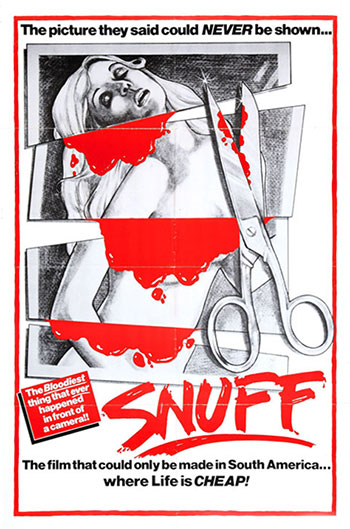 A so-called “snuff” movie involving the exploits of a cult leader leading a gang of bikers in a series of supposedly real killings on film.

Shortly after midnight on August 9, 1969 Susan Atkins, Patricia Krenwinkel, Linda Kasabian and Charles, Watson, all under the influence of Charles Mansons charismatic charge, entered the Tate mansion at 10050 Cielo Drive, Bel Air and slaughtered the occupants.

Four victims, including Sharon Tate, the wife of Director Roman Polanski, were stabbed over 100 times. Later that night, two more victims Leno LaBianca and his wife Rosemary were found dead from multiple knife and fork wounds. Over the following months, the perpetrators were arrested and their twisted motive to start a racial war was revealed.

In 1971, while America still reeled in shock, two exploitation film-makers, Michael and Roberta Findlay shot a Manson-inspired movie in Argentina called Slaughter to cash in on the bizarre cult slayings. After playing a disastrous run at a few theatres, the film slipped into obscurity, presumably never to see the light of day again.

However, five years later, the Findlays enterprising producer and film distributor Allan Shackleton was fascinated by rumours about a type of underground film called Snuff, in which actors were supposedly killed on camera. He then hit on the idea to insert new footage at the end of the film, re-title it Snuff and then release it to an unwary public. To promote the film, Shackleton went on a shrewd marketing campaign to suggest that Snuff was indeed the real thing. He even went as far as hiring a group of feminists to picket the film when it played in New York.

Although it made a modest profit and even had high-profile media spokespeople convinced it was real (presumably few of them had actually seen it) it wasn’t until the film hit the video shelves that its reputation took off. Presented in a plain cover and without any credits, video tape seemed the ideal medium through which such a film could exist. It subsequently went on to make a small fortune for the distributors.

The film opens with two hot chicks riding a motorbike to the strains of what sounds like a re-working of Born to be Wild by Steppenwolf. This is followed by the girls shooting and tying up another female (Anna), who scored some good drugs and decided not to share. Enter the Mansonesque-type cult leader Satan (pronounced say-tarn) cutting the feet of the splayed-out Anna with a knifeand the film just spirals out of control from here.

The carefree continues and involves an actress, Terry London, whose husband is supposed to have sex with one of Satans girls, Veronica, so she can give birth to the antichrist. But it all goes horribly wrong when Veronica (who is now played by somebody else!) becomes the victim of a film after the crew finish shooting a scene re-enacting the Tate/La Bianca murders?!

Whilst the film is appallingly acted, choppily edited, effects badly executed and the narrative makes no sense at all, its this ineptitude along with its exploitation history that gives it a strange allure.