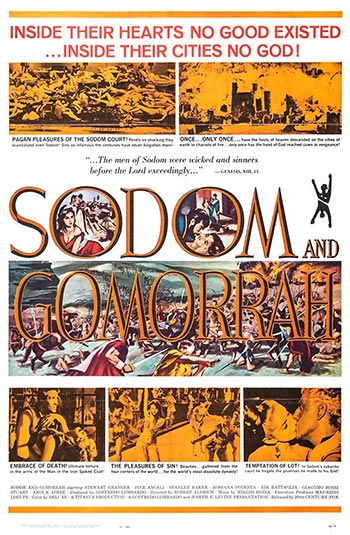 Sex, torture and betrayal in Biblical Sodom and Gomorrah. Lot, leader of the Hebrews, believes his people can co-exist with the Sodomites, a disastrous decision.

Hebrew leader Lot (Stewart Granger) leads his people to a fertile valley adjacent to the cities of Sodom and Gomorrah, hotbeds of vice and corruption ruled by the merciless Queen Bera (Anouk Aimée). When Lot orders a dam to be busted in order to prevent destruction of the cities by the attacking Helamites, the queen, in gratitude, allows Lot’s people to settle in Sodom. Soon, however, the veneer of civilization begins crumbling as Lot and the Hebrews become corrupted by the Sodomites.