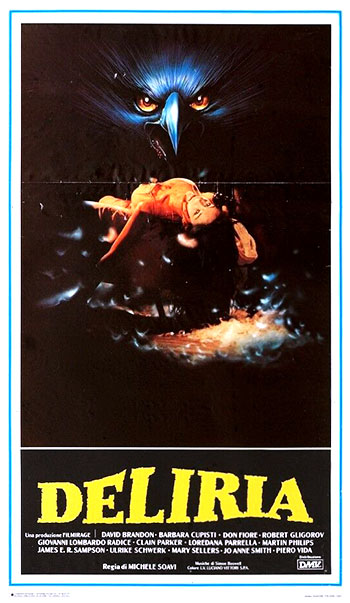 A troupe of struggling stage actors is rehearsing for a small-town production of a play. Everything seems to be as it should until one of the cast members turns up dead. In a panic, the others try to get out, only to find they are now locked in the theater with the killer! Which one of them committed the murder, and who will get out alive?

DELIRIA not only marked the directorial debut of Euro-cult favorite Michele Soavi (billed here as ‘Michael’ Soavi), it also marked a reunion of several prominent figures from the heyday of Italian exploitation. Produced by renowned sleaze merchant Joe D’Amato (Aristide Massaccesi – “Buio Omega”, “Emanuelle in America”) and written by splatter stalwart George Eastman (Luigi Montefiore – RABID DOGS, ABSURD), and co-starring John Morghen (Giovanni Lombardo Radice – CANNIBAL APOCALYPSE, CITY OF THE LIVING DEAD), this deceptively modest shocker attempts to subvert many of the clichés associated with ‘traditional’ slasher movies, and does it with style and grace. Viewers weaned on a diet of bland Hollywood ‘horrors’ may not succumb immediately to the film’s wayward plot developments (including the central device of an off-off-Broadway stage musical which celebrates the very same serial killer who winds up massacring most of the cast!), but once the basic premise has been established, the narrative assumes a near-demonic life of its own.

Beginning with a frankly horrific sequence in which the masked killer is mistaken for an actor during rehearsals and encouraged to ‘kill’ a female co-star (only to commit the bloody deed for real!), Soavi’s direction is razor-sharp and visually appealing. The murders are outlandish and gruesome, though also tragic in places (watch out for a shower sequence which operates both as a suspense set-piece and as a vivid demonstration of human cruelty), and Eastman’s clever screenplay strips the characters down to their emotional core, revealing a gamut of fears and prejudices which leave many of them vulnerable to the killer’s predations. The climactic sequence – in which a frightened young actress must retrieve an all-important key from its hiding place within inches of the killer’s feet – is ghastly, beautiful and terrifying, all at the same time. Outside of these major set-pieces, Soavi’s relative inexperience is betrayed by a couple of ragged camera movements and some odd editing choices, while the performances are compromised by flat post-sync dubbing. But overall, the movie is a triumph, one which plays Soavi’s mentor Dario Argento at his own game and succeeds beyond all expectations.