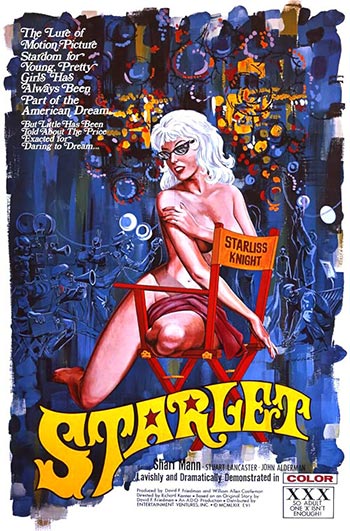 The Lure of Motion Picture Stardom for Young Pretty Girls Has Always Been Part of the American Dream!” One of the crowning achievements of sixties softcore cinema, Starlet! is an hilarious send-up of the adult film industry that casts the actual EVI Studios as itself.

But their washed-up former star, the vengeful Maxine Henning (KATHI COLE), conspires with an angry lesbian malcontent to bring down Adler and Latio by exposing their new leading lady’s tarnished past…

Filmed on the old Monogram lot (home of the Bowery Boys, Charlie Chan, and Bela Lugosi’s most outrageous cheapies), loaded with sumptuous production values and the usual bevy of bare beauties, Starlet! is a must-see for every sexploitation fan.

Shapely SHARI MANN starred in Friedman and RICHARD KANTER’s Thar She Blows!, released seven months earlier, which also featured the first appearance of Lancaster and Alderman as the slimy Adler and Latio. We would’ve loved to have seen a whole series of films starring these two. From the 35mm behind-the-scenes & beneath-the-sheets negative.