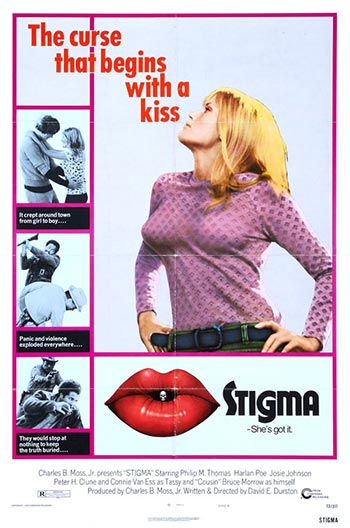 Star of Miami Vice Phillip Michael Thomas, is a young doctor who arrives at a secluded island community and discovers that there’s a deadly germ affecting the town’s young promiscuous residents. When trying to help contain the spread of the contagious disease, the doctor realizes there’s a lot more to the epidemic than meets the eye – including a major cover-up by the community sheriff.

It’s a sickening and twisted 1972 shocker from director/writer David Durston, the famous director of the 1971 cult classic I Drink Your Blood ! Join Durston as he spreads a whole new kind of disease with Stigma , a horrifying tale that begins with a kiss. Don’t even try to resist!!

It starts as a comedy, and is actually pretty funny; there are further comic elements dropped in willy nilly later. Then it becomes an anti-racist/bigotry statement, and again this isn’t badly done. Then it dithers with the notion of being a soft-porn movie but rejects it in favour of being (a) a sort of Public Services drama-documentary, a Dreadful Warning about syphilis, and (b) a thriller.