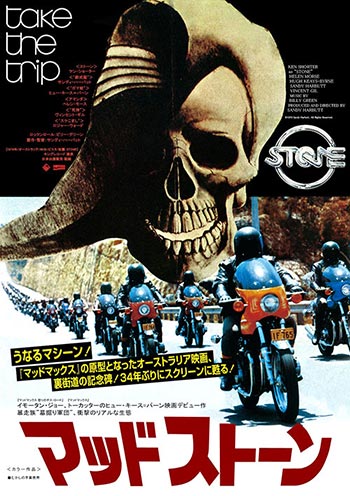 Members of the Grave Diggers Motorcycle Club are being knocked off one by one, and someone needs to find out why! Sandy Harbutts timeless Australian cult film about a bunch of regegades riding Kawasaki 900s.

Although it now looks rather dated, you must remember that when this movie was made, Australia was a very conservative place. This film broke a lot of new ground in the early 70’s. Firstly, it was all Australian. Written, Produced, Directed and Starring. Not an American in sight. Secondly, it contained shots of male and female nudity. Thirdly, it was extremely gory and violent for it’s day. But, the biggest thing it had going for it was it’s incredible bike stunts.(Have you ever seen a Kawasaki Z900 do a wheelstand?) There’s some fantastic locations in and around Sydney, and the funeral procession is spectacular, but the opening 10 minutes, or so, will have you on the edge of your seat. For those of you who are interested, 4 of the actors starring in “Stone” (Vincent Gil, Hugh Keays-Byrne, Roger Ward and Reg Evans) would later appear in George Miller’s “Mad Max”. It must be something about motorbikes!