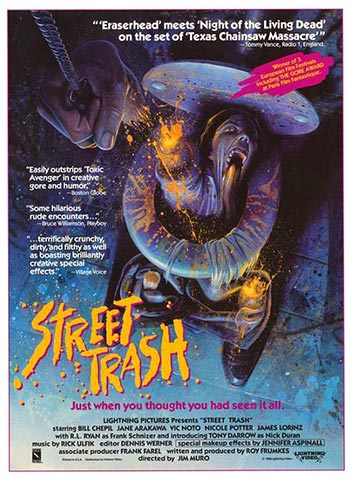 When a liquor store owner finds a case of “Viper” in his cellar, he decides to sell it to the local hobos at one dollar a bottle, unaware of its true properties. The drinks causes its consumers to melt, very messily. Two homeless lads find themselves up against the effects of the toxic brew, as well as going head to head with “Bronson” a Vietnam vet with sociopathic tendencies, and the owner of the junkyard they live in.

This movie is cheap, sleazy, vile, disgusting, florescent, stinky, slimy, perverse, insane, and retarded… which is why it must be viewed by everyone. You must watch this movie. Street Trash personified the essence of crappy, late 80’s horror slop, but also achieved legendary status within hip underground horror circles. This is truly one-of-a-kind cinema and resides in the outer realms of art-house oddities/gore flicks. They certainly don’t make ’em like this anymore!