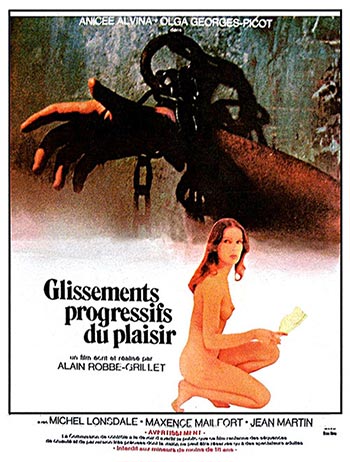 A young woman is questioned by the police and the judges, suspected of being a modern witch. The girl who shared her apartment has been found dead, and a pair of scisors impaled through her heart, as she lay attached to the bedposts. Apparently, the girl does have powers, to make all people around her fall prey to her spell, glissing progressively into desire, lust, and the unknown.

Alain Robbe-Grillet has to be one of the most innovative French novelists and film-makers. His “Successive Slidings of Pleasure” is a wonderful film that contains plenty of surreal moments and lots of sleaze. The movie itself is truly unique and bizarre, so fans of unusual European art-house exploitation won’t be disappointed. So if you are a fan of Jean Rollin’s works give this one a look.