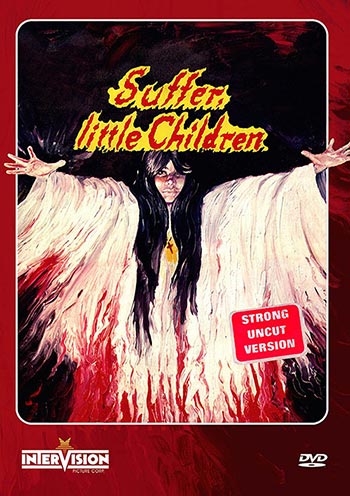 A mute child arrives at a children’s home and starts terrorizing the other children with her demonic powers.

The British tabloid press called for it to be banned among the furor of the Video Nasty witch hunts. The Censors refused it a rating in its uncut form. Many of the children involved in its production were never seen nor heard from again. Now SUFFER, LITTLE CHILDREN can finally be seen FULLY UNCUT AND UNCENSORED! The full story behind this mysterious occult feature may never be known.

The super rare and intensely troubled original UK video release was cut by several minutes and the box copy simply read: Suffer, Little Children a tale of a child’s demonic supernatural powers and the brutal…. terrifying results. Suffer, Little Children is a reconstruction of the events, which took place at 45 Kingston Road, New Malden, Surrey, England in August 1984. None of these events were reported in the press and now the house is scheduled for demolition in the immediate future.