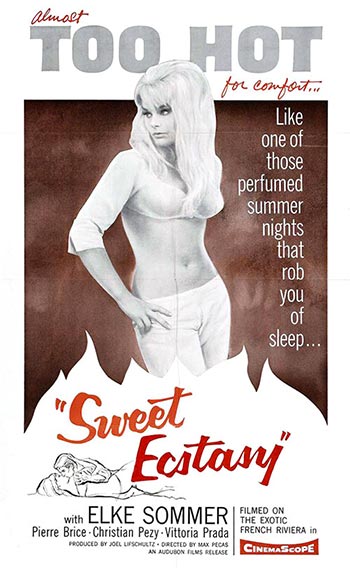 Olivier, a handsome but callow and moody young student, picks up an enthusiastic actress during a theatre rehearsal, and is introduced to her acquaintances — a group of jaded rich kids who spend their time storming around the Riviera harassing passersby, throwing wild parties and following all the latest trends. When sexy Elke gives him the eye, he leaves the actress in the lurch and joins the gang for a decadent party aboard a yacht. However, Elke’s wanton ways and Olivier’s inexperience do not mesh, and in a snit, he accidentally sets the yacht afire. The gang wreaks its vengeance by luring him into a dangerous contest of bravura on a construction site.

This 1962 film is a little bit “nouvelle vague,” a little bit “La Dulce Vita,” a little bit “Beach Blanket Bingo,” and a little bit “Emmanuel.” Fifty years after being made it is still lively, sexy as hell, and fun to watch. One has to remember that movies were still under censorship in 1962, so the scene where Elke Sommers takes off her top and allows Pierre Brice to squeeze her breasts really was daring and pushing the envelope at the time. Olivier (Christian Pezey) is a handsome coming of age brother of an actress. He gets involved with a gang of rich intellectual hedonists led by a political science professor named Maddy (Pierre Brice). They drink a lot, have philosophical discussions, casual sex, and play cruel games. They think of themselves as cynical and hip. Olivier is a romantic and wants to find a girl to marry and have children with. He’s seduced by Elke Sommer who offers him sex, but not love. Who will win Elke’s soul – Maddy, the cynic or Olivier, the Romantic? Well, you probably won’t care much who wins, but Elke Sommer is radiant here and compares with Bardot, Andress, and Monroe in sex appeal. The movie is really an excuse for laughing with her and looking at her body for an hour and 20 minutes. This makes it a pleasant time to say the least.