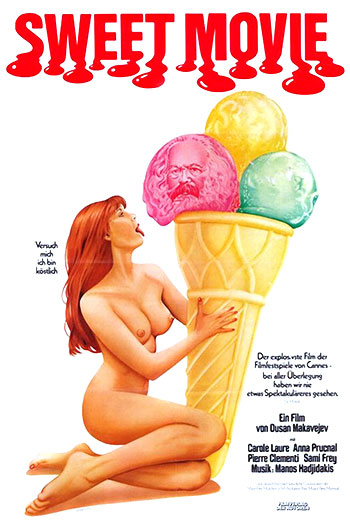 The intercut story of two women: a nearly-mute beauty queen who descends into withdrawal and madness, and another who captains a ship laden with candy and sugar, luring men and boys aboard for sex, death, and revolutionary talk. The beauty queen passes from a wealthy husband whose honeymoon delight is to urinate on her, to a muscular keeper who punches her, stows her in a suitcase, and ships her to Paris, to a lip-synching rock idol with whom she has a love spasm, to an Austrian commune complete with a banquet of vomit, urine, feces, chopped dildos, and wet nurses. By then she’s in a fetal position, until everyone’s rescued by reminders that “it’s just a movie.”

There are some films that are designed to shock, some designed to titillate, some that delight in disgusting the view. For Makavejev, shock, disgust and titillation are never the purpose, but a means to a form of psycho-liberation. Makavejev in Sweet Movie hurtles us head first into the confronting theses of Post-Freudian Wilhelm Reich. We are forced to confront our relationship to our primal beings. He literally smears our consciousness with faeces, vomit and carnality.

Here is revolution at it’s most personal, montaged together with lashings of wild humour. Allow your head to give up control and come along for the ride. Recommended to anyone who is willing to put their concept of themselves on the line a risk a flirtation with prurient madness.