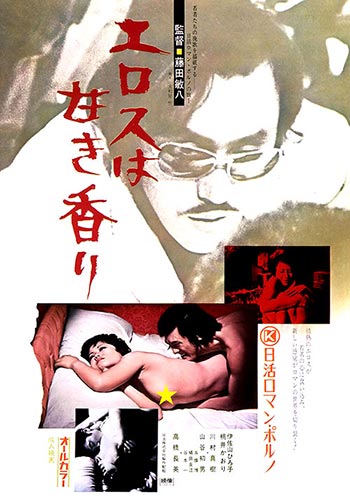 Koichi (Choei Takahashi) a cameraman comes to visit Etsuko (Kaori Momoi), his old flame, but his intention was actually to shack up with her so he has a roof over his head. He rapes Etsuko to force himself into her apartment. He’s been asked to moonlight by not so legitimate people to develop some film containing pornographic pictures, but he’s also weak willed , and has affairs with women he meets. Yukie (Hiroko Isayama), and Akira (Hajime Tanimoto) who’s a comic artist comes to visit Etsuko while she’s not home. They start to have sex in her apartment while she’s not home. From that point on, Yukie and Akira also starts to live in Etsuko’s apartment. Koichi seems to be not so stable mentally, and attempts a suicide, and does other weird things around the place. It’s not exactly sweet eros that’s going around the place, but no doubt that these people are living on a forefront of Japanese culture of the ’70s.

Director Toshiya Fujita, and script writer Atsushi Yamatoya are notable director and writer. Kaori Momoi is a famous actor from the ’70s, known for her nice looks. All these seems to bring the quality of this movie a notch above that of other Roman Poruno movies. A young Kaori Momoi had stunning good looks.